Asking for prayers for Zimbabwe. It seems the last weeks of calm were only the calm before the storm.

Again, Cornelious has written that Harare is burning! As Bulawayo had settled down, it seemed that this might pass, but perhaps it was only a rest before the present storm.

Please pray for our children and their caregivers, as well as the staff. This is happening in Harare, the capitol, but it well might spread to Bulawayo. 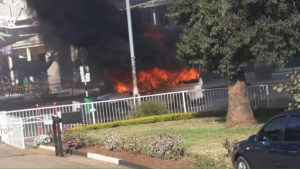 Harare: Zimbabwe is on a knife edge, as protests in the city center of the country’s capital have turned violent with protesters targeting vehicles belonging to the Police and the state broadcaster, ZBC. Shops belonging to Vice President Phlekezela Mphoko were targeted, looted, and ransacked as well.

The violence broke out after police allegedly tried to disrupt a demonstration planned by opposition parties and civil society.

The police are reported to have approached protesters with a heavy hand, but met massive resistance and were overpowered.

Protesters stormed Choppies Supermarket, a shop owned by the Vice President of the country, Phelekezela Mphoko, who has been the target of protests before after going for 2 years living in a hotel on tax payer money.

They stormed the shop in song and dance, demanding that Zanu PF government shut up shot and quit their role in leadership.

Violence soon broke out in several other places, spreading from the City Center to Bus Terminuses towards the exits as well as CBD outskirts.

Areas around Jason Moyo Avenue and Julius Nyerere were completely thick in tear smoke, while Market Square, and Fly Over areas had heavy police presence and running battles.

The protests are aimed at Robert Mugabe and his government, as Zimbabwe slips into a failed state for the second time in less than a decade.